We trust that the first few months of 2013 have been going really well for everyone.

We are always pleased to show you what product looks like when it has been installed on a job site, and here is a great example of a number of products working together in an install, consisting of trapezes made from strut that are in turn supporting ET Cable Tray. This is an example where multiple widths have been used on the same install but some of the wider trays have had space left in them in anticipation that if the electrical requirements on the job site change over time, it will be easy to add extra cables. 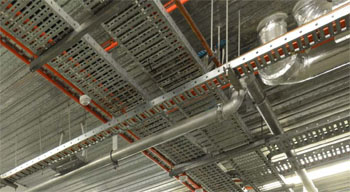 Trapezes are also being used to support the FRP cable ladder in this second picture: 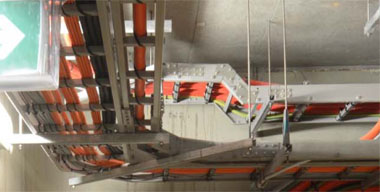 The trapezes themselves are secured to threaded rod with channel nuts, and being a concrete ceiling, drop in anchors have been used to insert the rod. The ladder itself (like the tray in the other example) is held onto the trapeze using hold down units that work with the strut profile of the trapeze.

Note that also in this example, the cables themselves are held down securely in place by using cable ties around the rungs. Steel and aluminium cable ladders, and steel laddertrays come with holes in their rungs to allow for the easy insertion of cable ties.

If you want to find out more about some of the techniques or products used in these installs by all means contact your nearest EzyStrut branch.